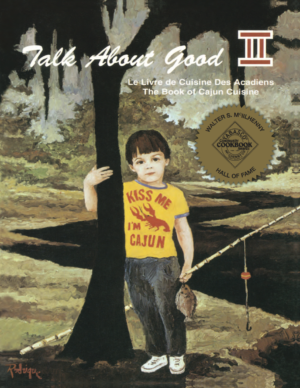 “Talk About Good II,” first published in 1979, is now in its 11th reprint and has sold over 215,000 copies. This cookbook features 335 pages in a hard cover with concealed wire and over 700 taste-tested and cross-indexed recipes.

“My family is so happy that Talk About Good II is still a must-have cookbook for any self-respecting Cajun,” said Jacques Rodrigue, son of artist George Rodrigue. “Thank you to the Junior League for wanting to partner with Dad and his depictions of South Louisiana life on the project 40 years ago. We are excited for the anniversary this year and look forward to several events around the state to celebrate the cookbook, the artwork and the recipes.” Jacques Rodrigue also spoke of his father’s contributions to the book by saying, “Dad always said, ‘books sell paintings,’ and he was excited to have this book as part of his catalog, to be able to show just how important and how special these paintings are. His mission was to visually interpret the history of Acadians on canvas. There is no other way to talk about Cajun culture without talking about its food. The members of Junior League did a great job of capturing how special that food is with those recipes and tying in dad’s art. It is the perfect book that doesn’t get any more Cajun.”

After 40 years, how can one cookbook still remain such a relevant part of the Acadiana culture and community? “I think the cookbook is still relevant because of the tradition it represents. All of the menus focus on so many of our traditional foods,” expressed Kathy Leonard, Cookbook Committee Chair during the conception and publication of “Talk About Good II” (1974-1979). “I think the art also makes it remain relevant and is probably why it continues to sell so well.”

A recent exhibit at the Southern Food & Beverage Museum (SOFAB) in New Orleans celebrated Junior League of Lafayette’s cookbook, “Talk About Good II,” along with the cookbook’s artwork by George Rodrigue. The exhibit was both incredibly informative and well-styled, and was a product of a collaborative effort with our Cookbook Committee, Sustainers, and the museum staff. Several themed segments were created to celebrate the rich content of our beloved “Talk About Good II” cookbook: Cooking Equipment; Women of Junior League; Rodrigue Painting Gallery Wall; Techniques and Products; Tablescapes; and Impact of “Talk About Good II.” Local artists, such as Denny Culbert and Danielle Hein, as well as museum staff, made the exhibit come to life through portrait photography, YouTube tutorial videos and custom murals.

“Talk About Good II” is not just a cookbook, but a snapshot of a place and a time, showing us how people in Southwest Louisiana ate, drank and lived. Brent Rosen, SOFAB President and CEO shared, “’Talk About Good II’ kicked off a major trend of community cookbooks throughout America, and as a food historian, all of those books provide the same window into the cooking lives and culture of the people in those communities.”

Part of the exhibit featured four large-format portraits of Junior League of Lafayette Sustainers and original Cookbook Committee Members — Cookie Bacque’, Sally Herpin, Janet Begneaud and Kathy Leonard — who were all crucial to the production of “Talk About Good II.” Herpin mentioned that the process of celebrating her past work with the League has been a delight. “The relationship with the museum has felt professional from start to finish. They have been so interested in learning about how we put this cookbook together, and it is clear that they value the history of our culture, work and, of course, recipes.”

When asked about visiting the museum exhibit in person, 2019/2020 Cookbook Chair Kristen White recounts, “When I turned the corner at the museum and saw the huge portraits hung on the wall of the women who brought this fabulous cookbook to life, I was overwhelmed with pride. It was incredible to see these strong women featured alongside their own recipes and the artwork of George Rodrigue. Our wonderful organization is founded on their legacy of these cookbooks, and they are still cherished and purchased thoughtfully 40 years later.”

The exhibit was unveiled as a centerpiece of the Made in Louisiana Festival in early December and remained open through March 2020. According to Rosen, the exhibit was well received by visitors. “Everyone has loved the exhibit since it opened. Our staff are from all over the U.S., but all of them were familiar with ‘Talk About Good II’ and its impact on the culinary culture of Louisiana. Having the exhibit gave the whole team something to focus on, and we have done follow-up programming inspired by the exhibit since it opened in December. The community response has been excellent as well, with many visitors stopping to visit the front desk on the way out to purchase copies of ‘Talk About Good’ and ‘Talk About Good II’ after learning about the books from the exhibition.”

Thank you to the Rodrigue family and the staff at The Southern Food & Beverage Museum for this unique and exciting opportunity.